Been a wild few weeks. We got hit with the biggest winter storm that the Northeast has seen since I have been alive. Got over 3 ft of snow in my town.

Obviously with conditions like this I was trapped indoors for a few days, same as most of the regions non-emergency workers, working from home.

One day after the storm I was brave enough to venture out. The main streets were fairly clear and dry, but getting from my driveway to the main section of town was quite arduous.

Only way to learn how to ride in new conditions is to try, and drops like this are inevitable at first. I did manage to get the hang of it after a while, although it is still quite daunting to ride in these conditions, and I do not recommend it. Thankfully the little Yamaha is made for just this treatment, granted they intended it to be dropped in dirt not snow, and it can handle minor drops and falls with no noticeable damage. As a bonus, a light bike is easier to pick up, especially in slippery snow. 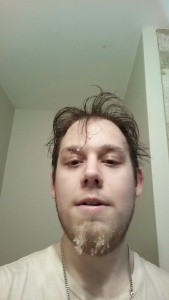 January is officially down, leaving only February and the often mild March months before I will have officially survived my first winter on two wheels.

Temps rose to an unusually high 50 degrees, quite unusual for this time of year. So I took the opportunity to wash the poor Yamaha, since she has been my work horse for the past few weeks due to icy conditions.

The salt has been doing a number on her. They really go a bit heavy on the salt around here, especially in the tunnels and once you get into the city. It is not unusual to have to ride through a giant pile of salt build up at the beginning and end of the tunnel into Boston.

Cleaned up well, no signs of any real damage. A bit of surface rust starting to form on the rotors, but that happens even in the summer thanks to the ocean breeze. Given the conditions I have taken to cleaning and lubing the chain and sprockets at least once a week, which I feel is absolutely necessary if there is to be any hope of more than one season out of this chain. I have been cleaning the break rotors about once a month, which is not much more than I would in the summer anyway, that ocean air is a sneaky bitch.

The tire studs seeming to be holding up ok, I think I’ve only lost one out of well over 150. They are showing a tad of surface rust, but that is to be expected, and they do not appear to be showing any wear further than aesthetics.

Slightly snowy ride into work today. Chilly but warm compared to the last few weeks. The studs are performing wonderfully on the icy roads, feels like there is no ice at all.

Now if I can just figure out a way to stop the poor GoPro from getting all smudgy from the snow after a while.

Been riding to work daily now. Not a whole lot of exciting pictures, its been really shitty and grey out. Super cold the last two days, well into the single digits with the windchill. Plus a bit of snow on and off.

Luckily my new office has an in house tap to help with the cold.

Been a crazy few weeks with the holidays and my ongoing job search. Thankfully I have secured a new job and I will be going back to work starting next week. I hope everyone had a wonderful holiday and new year. I went out today and prepped all the bikes. Updating the registrations, cleaning the chains, checking tire pressure, etc… 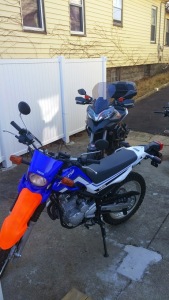 Not too bad for the first ride of the year, only about 28F.

Got some fancy new RAM mount components today for both bikes. Installed a RAM ball piece on the handlebar clamp on the Ducati and a simple U clamp on the Yamaha. Just need to test out some different angles. 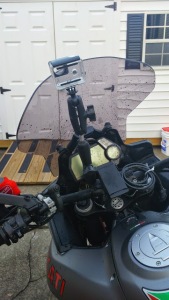 Did some test runs with a few angles. I need to get out again if the sun ever comes out again to get some more shots of the beach.

Took a ride through the city and down the south shore. Was the first sunny day in a while. A little chilly but it got warmer as the day went on.

On the way home it was finally warm enough to give the poor Ducati a bath.

The sun finally came out today. Was still pretty chilly, around 34F, but the roads were clear and it was pleasant. 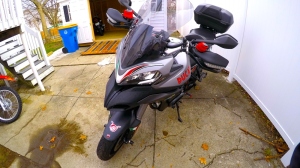 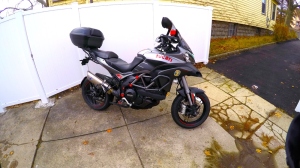 Playing around with the GoPro settings for still images. Once you get used to the super wide angle lens you can get some pretty sweet shots, and the editing software is fairly robust as well. 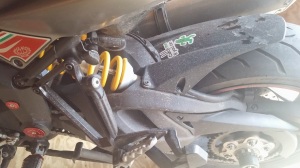 The poor Ducati is incredibly filthy, but its too cold out to give it a proper washing. I need to find a heated car wash nearby.

As a reward for making it through another week without maiming or killing myself I enjoyed a delightful taco lunch.

First real bit of snow today. Just some flurries really, but I figured it was a good time to test out little Blu. Tried the chest mount strap again, too see if it would be any better on the different bike. 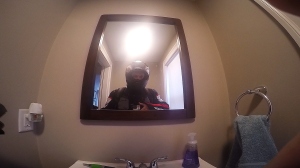 Was not too cold, only around 35F, so the snow wasn’t really sticking to the road. But conditions were quite wet, and visibility was reduced a tad. Had to wipe the snow from my visor every few minutes.

The studs handled very well. I did not lose traction at any point and I was able to maintain normal operating speeds for the conditions. The video below shows some highlights from the trip. At about :40 you can hear the very unique sound my tires make with the studs installed. A quick check when I got home showed the studs to be in good condition, and none were missing.